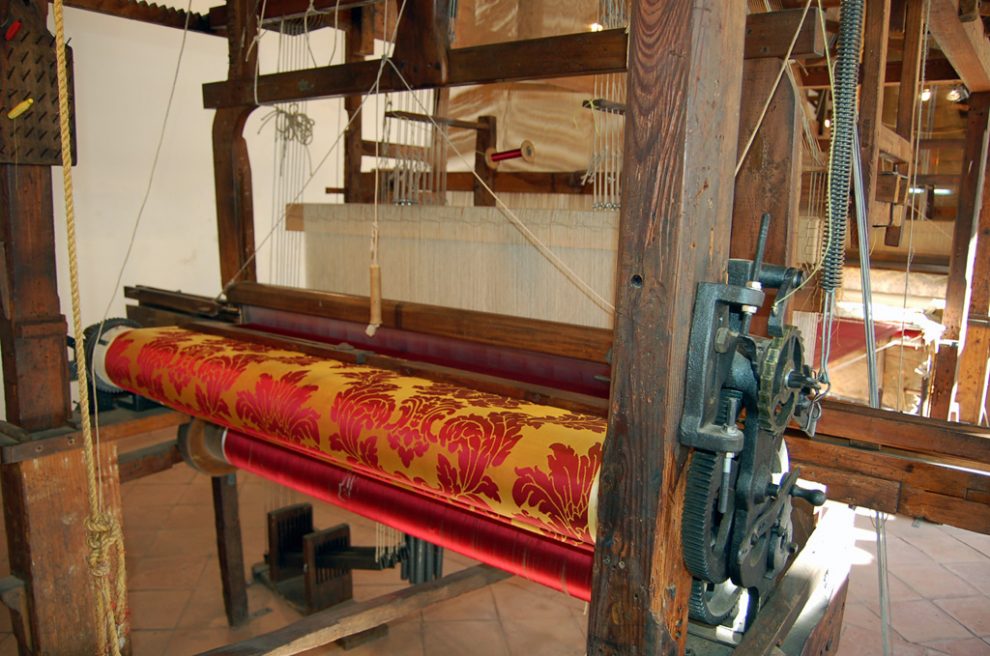 The history of the Neapolitan tailoring school is strictly intertwined with the history of textile manufacturing, in particular with the silk factory.

At the times of Pope Leone III, during the Byzantine duchy, references to the skilful Neapolitan textile manufacture were already traceable.

That time saw the rising of the prestigious tradition of silk, reaching its peak thanks to the Bourbon factories in San Leucio, Caserta, about a millennium later.

The Neapolitan medieval weavers were well-known and would be famous for a long time for their skill in working linen; their fame was so great that the well-educated Arabs defined the city “Napoli del lino ” (the city of linen).

During the Aragonese period, the cultural richness expressed itself also in the extreme attention to the smallest detail: the ability and care in refining the most hidden parts revealed the rigorous professionalism of the people from Campania, known for their recklessness of life and inclination to improvise everyday reality.

The fabrics which were to be used in the fashion industry, both male and female, were processed by overlapping various patterns which looked like real bas-reliefs and required weavers, tailors and embroiderers a painstaking job.

In 1735 Charles of Spain closed the long Neapolitan viceroyalty, putting an end to Renaissance and giving start to that happy Baroque that the eighteenth century would exalt as the “Neapolitan Baroque civilization”.

In those years the textile crafts renewed both its taste and the quality of its products, reaching fine results. Campania became the city of damask, taffeta and gold cloth, whose manufacturing was so hard and valuable that was performed by small family communities of artisans operating in Naples, in small workshops in the ” Armieri ” area.

Typically, the same building worked as “casa e puteca”  (home and workshop): the big family lived upstairs while downstairs they would operate; this custom still survives nowadays, especially in the most popular neighborhood.

During the centuries, the territory of Caserta replaced Naples as pole of the silk in South Italy; in particular, in the eighteenth century Ferdinand IV of Bourbon established the colony of ‘setaiuoli’ (silk workers) in the small village of San Leucio . The king caressed the dream of an industrial city , and that was the place chosen to implement the project of real utopia.

This project started with the construction of the Reggia of Caserta, and this place came to be in the middle of one of the most extraordinary events of the 18th century in Campania.

In fact, Ferdinand IV wanted to establish a colony, having its own statute and working within a large manufactory, the silk one, housed in a large city, thus laying the foundations for the establishment of a real industrial model; he also tried to assure it financial independence, creating a silk factory and a textile factory.

He then wanted to give the colony an organic and symmetrical urban structure. Yet, the factory, which grew larger and produced a huge range of fabrics, was never able to prosper from the economic point of view, because the profit was not its purpose .

In fact it was a State industry, but to the service of the community, and therefore very far from the concept of the industries of our times .

The King imposed a mixed code of real and utopian socialism; it was 1789: while in Paris the revolution was seething, in San Leucio perfection was instituted.

Three were the cornerstones around which the Constitution of San Leucio was centered: courtesy, considered the origin of the public peace; good faith, seen as the first of the social virtues; and merit, the only real means to differentiate individuals.

Everything revolved around the factory, a mechanical silk factory, supported by the King ” with powerful means “, which used the raw material generated by worms bred in homes in Caserta and beyond.

From the first spinning machines and frames until the construction of a large textile mill, it all started from the silkworm, whose larva comes out of eggs hatched in spring, makes three or four mute and then ‘ rows ‘ the cocoon, where it undergoes the metamorphosis that transforms it first into a chrysalis and then in a butterfly.The yarn produced by the worm can be as long as hundreds of meters, and becomes rigid because of the sericin.

The ‘ reeling ‘ was the phase when, after having unraveled the thread from the cocoon, softened it by soaking in warm water and pulled up to form coils, gave start to the real silk production. With the phase of weaving, the fabric was then realized using hand looms.

The fabric obtained underwent a series of finishing operations such as, for example, the ” moire “, that is the compression under large cylinders, which was followed by the dressing, the shearing and bending.

A rich range of satins, brocades and velvets were produced both for clothing or as wallpaper .

With the introduction of the Jacquard weaving, which was nothing more than a frame imported from France in the early decades of 19th century, production was enriched with silk brocade fabrics, gold and silver, shawls, scarves, bodices, laces. Local products also started to be produced, as well as the gros de Naples (i.e. a stout, plain-woven silk dress fabric ) and a fabric for clothing called Leuceide.

The only happy period of the “Royal silk factory” was the initial one; in fact, despite the introduction of numerous technical innovations such as the Jacquard loom and machine lisage, the later stages failed to raise the Bourbon manufacturing.

The utopia of San Leucio ended when in 1861, the kingdom was annexed to Piemonte following the invasion of Savoy: the silk factory was given to private, and the statute became waste paper .

The factory survived the Kingdom of the Two Sicilies and the Savoy domination and, though with very different features, still continues today to keep alive a distant and precious tradition that has spread throughout the world.

The fabrics from the Ancient mill still cover the walls of the Chamber of Deputies, the Italian Senate and the White House; the vestments, as well, used by Pope John Paul II during the Jubilee were from the same manufacturing company.